Following Griatitude Coffee Co.’s pop-up event during the 2022 Morehead-Cain Discovery Weekend this spring, Sarah Chocron ’25 and I were flooded with inspiration and new ideas about how to grow our company and social impact.

Although we had accumulated a lot of guidance from professors, friends, and well-wishers, we realized our knowledge lacked the advice of someone with experience—in coffee, social entrepreneurship, and building a company from the ground up.

Then, it hit us. We needed to talk to Scott Diekema ’19 about co-founding the Meantime Coffee Co., a cozy coffee spot nestled within the UNC Campus Y, the University’s largest advocacy and public service student organization. The shop supports undergraduate scholarships, campus sustainability efforts, and student professional development.

The shop launched in 2016 with $15,000 seed funding, as well as financial support from the Morehead-Cain Foundation through the Lovelace Fund for Discovery and the Professional Experience Venture fund.

For Scott, the greatest challenge of Meantime’s beginning years was “navigating the very human dynamics” of working with others while “cultivating a culture that works.”

Any context in which people are under pressure naturally creates tensions, making it all the more essential to be intentional about the culture you seek to foster, Scott says. Bringing in team members with diverse backgrounds and interests provides any company valuable insights and expertise.

An orchestra of people

Being a part of the Morehead-Cain community, where ideas for self-starter projects are always brewing, Scott emphasized the importance of reaching out to your peers for help.

“If you don’t have the skills, there is certainly someone in your Morehead-Cain class who gets it,” the former Meantime CEO says.

While it may be tempting to launch into projects head-on and independently, a lot can be gained from tapping into local innovation networks at the University and in the greater Triangle region.

“Meantime was an orchestra of people who made it what it was from a strong founding team,” says Scott, now a creative producer for JustJobs Network and an interactive designer for the Reality Recycling Center. “Connect with other like-minded people and soak it all up.”

The entrepreneur pointed to the UNC Shuford Program in Entrepreneurship, Launch Chapel Hill (a startup accelerator and co-working space on Franklin Street), and classes through Duke Innovation & Entrepreneurship as good resources. The alumnus was an Adams Apprentice through the Kenan-Flagler Entrepreneurship Center in 2018.

Scott describes himself, in typical Morehead-Cain fashion, as just a small part of a large group of people within the Campus Y’s leadership, Meantime’s management team, and of the original group of head baristas. That teamwork mentality has been crucial to Meantime’s success.

“My biggest advice for self-starters is not doing it all yourself,” the founder says.

Undergraduate students also have a unique advantage in approaching strangers about a business idea, Scott believes, just by being in an educational environment.

“People want to talk to students. That isn’t something you fully realize until you leave college,” he says.

Driving impact, one cup at a time

Meantime has always been about more than good profit margins. Lifting up other ventures, organizations, and people for the greater good is at the core of the company’s mission. In fact, Scott’s favorite part about working in the coffee industry isn’t actually the java.

“I’m not a coffee fanatic. I love coffee for how it brings people together,” he says.

As Griatitude’s co-founder who actually dislikes milk, I can relate. But, what is Scott’s coffee order? His preferred caffeine choice is a lot like his approach to business: use what you have to make the most impact.

“I’m a black cold brew guy. It’s the most caffeine you get out of a coffee.”

Scott graduated from Carolina with degrees in philosophy and Asian studies.

More about the Morehead-Cain Self-Starter Series

The Morehead-Cain Self-Starter Series highlights scholars and alumni who took the initiative to fill gaps within their communities.

Rather than focusing on “success” alone, Sarah Chocron ’25 and Ria Patel ’25 dive into the conversations, connections, and networks that got these self-starters to where they are today. The series is inspired by the self-discovery Sarah and Ria experienced in starting their own pop-up coffee shop on campus, Griatitude Coffee Co.

Stay tuned to learn more about these Morehead-Cains—not just what they built, but how they built it.

Ria graduated in spring 2021 from St. Mary’s Episcopal School in Memphis. While in high school, the first-year scholar founded INSPIre, an organization focused on adolescent mental health and well-being, and she conducted independent research projects at the University of Memphis, studying working memory and learning conditions.

At Carolina, she plans to pursue a major in neuroscience with minors in business and chemistry, and to continue her interest in mental health and wellness.

Ria and Sarah Chocron ’25 are the co-founders of Griatitude Coffee co., a pop-up coffee shop with affordable specialty drinks for students in the Chapel Hill area. She plans to pursue a double major in information science and history with a minor in cognitive science.

Sarah Chocron ’25 of Wichita, Kansas, is a writer, freelance web designer, and musician. On the Morehead-Cain Scholar Media Team, Sarah covers the selections and alumni beats, with a focus on the first-year scholar community.

Sarah and Ria Patel ’25 are the co-founders of Griatitude Coffee co., a pop-up coffee shop with affordable specialty drinks for students in the Chapel Hill area. She plans to pursue a double major in information science and history with a minor in cognitive science. 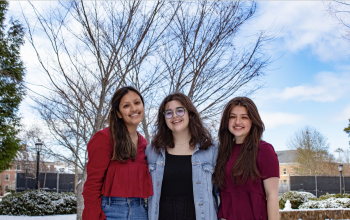 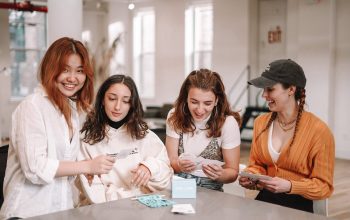 Morehead-Cain Self-Starter Series: Izzy Grandic ’25 and her journey to founding Boob Blurb, a card game that educates, appreciates, and communicates about women’s health and wellness 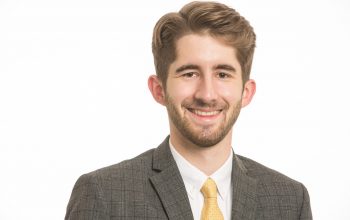