Written by Laurelle Maubert ’25 of the Morehead-Cain Scholar Media Team and a member of Team Minneapolis for the 2022 Civic Collaboration program.

You might not expect a faith-based nonprofit to be at the forefront of the climate justice movement. That’s just one of the ways that Minnesota Interfaith Power & Light (MNIPL) stands out, says Buff Grace ’91, director of faith networks for the organization in Minneapolis.

“You don’t find that climate and faith go together in many fields; it’s usually one or the other,” Buff says, who was drawn to lead MNIPL because of the nonprofit’s commitment to both imperatives.

“A lot of faiths have teachings about caring for the ecological health of the local ecosystem,” the director says. “All of these faiths share the understanding that we must care for the natural systems we depend on.”

Based on those tenets, Buff finds it surprising that many faith communities are slow to follow their own “ancient ways of wisdom” by making caring for the environment more central to their mission.

“Those natural systems pre-date any human existence, so it is easy for them to blend into the background. We forget how critical they are to our survival,” says Buff, whose love of nature was informed by his childhood upbringing on a horse farm. The alumnus is based in Stillwater, Minnesota.

As participation in many faiths decrease globally, becoming involved in climate justice is also an opportunity for faith communities to be “much more relevant” than they may seem, according to the alumnus, a second-year Morehead-Cain Civic Collaboration host for the 2021 and 2022 Summer Enrichment Program.

When Buff first received an invitation to become a Civic Collaboration host from Morehead-Cain’s Montez Thomas, he knew it’d be an excellent opportunity.

Having a group of scholars to work on a specific dilemma for eight weeks is a “gift” to the organization and its team capacity, Buff says.

The alumnus tasked his first group to better understand what could help faith-ascribing people, at the collective and individual level, take more advantage of improving energy efficiency.

This year’s group tackled the barriers that congregations face in their climate justice work, as well as what resources might help them succeed.

Both issues are “key to a lot of what we do” at MNIPL, Buff says, and will help the organization more effectively deploy their resources. The nonprofit supports faith communities interested in addressing the climate crisis.

While climate justice work is challenging, Buff is confident that one of the most pressing issues of our day can be solved through the power of the Morehead-Cain network.

“If we got all the Morehead-Cains working on this, we’d solve it,” Buff says. “We wouldn’t even just figure out a good idea to solve it. We’d also figure out a way to do it and to get the planet on board.”

Buff partners with Civic Collaboration to inspire scholars to get involved in climate work as well as to give back to the community as an alumnus. He also hopes that the internship with MNIPL will encourage scholars to think about working in the nonprofit sector after graduation.

“The public sector can be a vibrant place to work, and we need strong leadership and intelligent people in these fields,” the director says.

“Buff has been the best part of my experience interning with MNIPL. He’s given us invaluable guidance and supported us throughout the summer.”

Hosts propose a dilemma or issue for scholars to address together, provide the scholars with guidance and mentorship, and share information and resources pertinent to the projects.

The Morehead-Cain Scholarship provides each scholar with a cost-of-living stipend and transportation to and from their host city (hosts are not expected to provide financial assistance to scholars).

After having witnessed the talent that two Civic Collaboration groups have provided to MNIPL, Buff says that any organization can benefit from the “expertise that can come in the room with a group of Morehead-Cain Scholars.”

“If anyone has any hesitancy about rising second-year college students doing a project, know that the scholars have already worked really hard to get where they are,” the alumnus says. “There’s a reason they got this scholarship.”

To learn more about partnering with Morehead-Cain for future Civic Collaboration projects, contact Montez Thomas or visit our website.

Laurelle Maubert ’25 of Frederick, Maryland, covers the alumni beat for the Morehead-Cain Scholar Media Team, with a focus on law and politics.

In addition to writing for the Scholar Media Team, the second-year scholar is a business analyst for Consult Your Community, a UNC–Chapel Hill student organization that provides pro-bono consulting to local businesses and nonprofits. She also served as a vendor relations associate for Carolina Women in Business’s annual fundraiser, Jewels of Hope, and is a member of the Phi Mu sorority.

Laurelle plans to pursue a double major in business and French and a minor in creative nonfiction writing at Carolina. 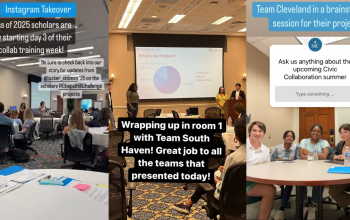 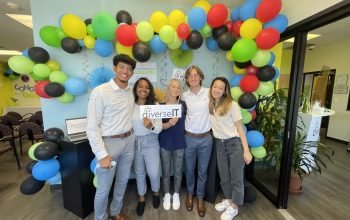 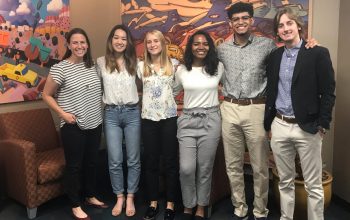 The Catalyze podcast: Liz Kistin Keller ’04 of Albuquerque’s Office of the Mayor on increasing access to digital services in local government