Marketing personalization has been around for decades, but healthcare has lagged behind. Entrepreneur Dave Werry ’06 is helping the sector catch up.

Werry is the co-founder, president, and chief operations officer at Well, a health tech and services company based in Chapel Hill.

As a Morehead-Cain Scholar Media Team member covering business, I reached out to the alumnus to learn about how the company is creating scalable solutions for individualized healthcare. We spoke earlier this spring at Well’s headquarters, located on West Franklin Street.

Werry’s first exposure to the healthcare industry came from a surprising place: an investment bank in New York City. As a Morehead-Cain Scholar, he interned in the banking company’s healthcare group. The internship turned into a full-time position for his first two years after college, where he was able to develop a deeper understanding of the inner workings of federal healthcare infrastructure.

“That sparked an interest for me—one that continues—in the U.S. system and how to bring improvement and transformation,” said Werry, who graduated with degrees in economics and political science from UNC–Chapel Hill.

He continued his path as a healthcare investment professional by joining Hellman & Friedman, a private equity firm, in 2008, and earning an MBA from Harvard Business School.

The Oshawa, Ontario native accepted his first leadership position at the research firm Pharmaceutical Product Development (PPD) in 2013. He was executive director of PPD’s office of the CEO before becoming the global head of biotech less than two years later.

All of these career moves provided Werry with the knowledge and skills he’d need to start his own venture one day. But it wasn’t always easy going.

CVS acquired the health insurance company just a year into the job, reshuffling the staff structure. One of his mentors and the former CEO of Caesars Entertainment Company, Gary Loveman, recruited him to join Aetna as vice president and head of consumer health products in 2016.

“Because of the leadership changes, the path to innovate in any kind of meaningful way disappeared,” said the alumnus, who was promoted to head of transformation at Aetna during his stint at the company. Werry and Loveman decided to leave the enterprise together and co-found Well in February 2019.

“Our vision is to give everyone this concept of having a daily health partner,” Werry said. “The platform is always looking out for opportunities for you, whether that’s a lower cost for a service or medication, improving your health habits, or peeking around the corner to identify risks.”

The pandemic put the healthcare sector’s woes on full display, making technology like Well’s even more relevant, according to the co-founder.

“COVID-19 has accelerated by a decade the acceptance that today’s healthcare system is not well equipped to serve people’s needs at the individual level,” said Werry, who described Well’s central mission as one that helps everyone have “someone in their corner.”

““The ‘new’ world is bringing to life our vision, which is to provide each person with an always-on, trusted presence when it comes to their health.””

When I entered their headquarters for the interview, I was taken by the clean and modern aesthetic of the building, the sleek co-working spaces, and the large bar with coffee and snacks. We spoke in an all-glass conference room, where you feel as if you’re floating.

But the architectural choices aren’t just about design; it’s about reinforcing Werry’s vision for Chapel Hill, his staff, and his clients. For the alumnus, choosing Franklin Street for his venture was about finding “the right talent and the right energy.”

“I saw a lot of examples of not getting the work culture right in past lives, where the energy levels of an office park or a dated building just suck the energy out of the company,” the co-founder said. “We’ve been very focused on having the right culture, the right talent, and the right space to work in.”

Part of Werry and Loveman’s strategy includes hiring Morehead-Cains. The company has hired six scholars as interns since its founding, with plans to hire a couple scholars this summer. And in addition to Werry, three of the ten members of the company’s leadership team are Morehead-Cain Alumni.

“We hire as many Morehead-Cains as we can, and I think it’s been a secret sauce for our talent acquisition,” said Werry, who attributes the Summer Enrichment Program (SEP) for training scholars to be comfortable navigating complex situations, often without much direction.

I couldn’t end the conversation without asking the healthcare executive for advice for scholars like me, especially as so many of us are worrying over finalizing summer or post-graduation plans.

“Take advantage of this time where you have a lot of freedom and the permission to think big, try new things, and explore,” the entrepreneur said, encouraging us to dismiss the pressure of feeling as if you have to have one plan and to stick with it. “Lean into this unique period that Morehead-Cain gives you to be creative and to be bold.” 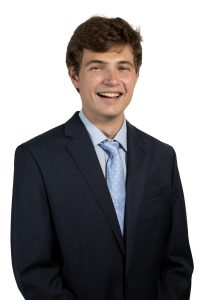 William Dahl ’25 of Wilmington, North Carolina, covers the alumni and selections beats for the Morehead-Cain Scholar Media Team, with a focus on business.

The first-year scholar graduated in spring 2021 from Cape Fear Academy. In high school, he served as student body president and was an active member of his school’s theater program. At UNC–Chapel Hill, William serves as a business analyst for Consult Your Community and as an advocate for the Community Empowerment Fund.

William plans to pursue a major in business and minors in philosophy, politics, and economics (PPE) and classical humanities at Carolina.