In a 2015 TED Talk that resurfaced in recent weeks, Microsoft co-founder Bill Gates warned that the world was not ready for another global pandemic like the one witnessed with the Ebola virus.

During the past two years, the billionaire philanthropist has funded the development of Emergency Operations Centers (EOCs) around the globe through the Bill & Melinda Gates Foundation to strengthen countries’ capacity to detect and respond to public health emergencies as well as to drive malaria elimination.

In collaboration with the Lao People’s Democratic Republic (PDR) Ministry of Health (MoH), the Gates Foundation identified the Public Health Emergency Operations Center (PHEOC) in Laos as the first such EOC to be selected for the project in 2018. Population Services International (PSI), a nonprofit global health organization founded by two UNC alumni, was chosen as the first recipient of the EOC strengthening to accelerate malaria elimination grant, with partners including the National Center of Malariology, Parasitology, and Entomology (CMPE), the WHO Lao PDR Country Office, and the Clinton Health Access Initiative (CHAI).

The team responsible for designing and implementing the project includes Samuel Haddad ’18.

Samuel said PSI’s business approach to public health and track record on malaria elimination in Laos made the organization an ideal candidate to implement the EOC strengthening project. He joined PSI as a malaria elimination associate three weeks after graduating from Carolina, supported by a Princeton in Asia fellowship.

PSI, which supports malaria case management and detection in private clinics and pharmacies, and CMPE began measuring in real time when people were being tested.

The collaborative approach to malaria surveillance served as a framework for other public health crises, including COVID-19. (The CMPE has led a 60 percent reduction of malaria cases in Laos since 2016, which is significant, Samuel said, given that as much as 10 to 15 percent of all malaria cases are detected in Laos).

“The PHEOC was able to understand early on the need for more ventilators, beds for intensive care units, and isolation wards, and communicate those needs to public officials,” he said. “From risk management to the economic fallout, a lot of what we’ve seen globally with the current outbreak comes down to health care systems’ inability to cope with a sudden influx of patients.”

When the Foundation spoke with Samuel in mid-March, Laos had yet to experience its first coronavirus case. The Southeast Asia country has since confirmed 12 cases, according to the Lao MoH and the World Health Organization (WHO).

“Due to limited financial and human resources, what essentially didn’t formally convene a year ago when we began implementing the project is now generating daily situation reports that go all the way up to the Prime Minister’s office,” said the alum, who is part of a team responsible for managing a health care network of 500 pharmacies and clinics in Laos’s southern and northern provinces.

Samuel said that as the coronavirus evolves and case definitions change, the PHEOC, in conjunction with PSI and other other key stakeholders, will make recommendations to the government for how to mitigate the outbreak both regionally and in individual villages.

A village deserted: ‘Almost everyone I know has left’

While day-to-day life has remained fairly “normal” in Laos, Samuel said that most of his American friends and colleagues returned to the United States before Laos shut down border checkpoints and commercial flights.

“Almost everyone I know has left [Vientiane] in the last week,” he said, indicating plans to stay in Laos until his contract with PSI runs out in June. Samuel said there is also a strong possibility that he’ll be repatriated by the U.S. Department of State as soon as next week.

While there has been anxiety and the occasional emotional “freakout” due to COVID-19, including the moment when he received notice that his Princeton in Asia fellowship was withdrawing all support due to the crisis, he said he is resolved to stay in Laos.

“I’m a bit worried that there are no flights to the United States in the next three months,” said the Amarillo, Texas, native, “but I’m confident that Laos will be able to deal with the COVID-19 cases that we experience.”

If he can return, he said he hopes to visit the Foundation in August, when, pending UNC’s administrative decisions and travel bans, he plans to return to Chapel Hill to begin a five-year, joint Doctor of Medicine and Master of Public Health program. Carolina’s School of Medicine offers a Health Care and Prevention MD-MPH program. Samuel graduated from the UNC Gillings School of Global Public Health with a Bachelor of Science in Public Health and a concentration in nutrition.

He attributed his research and public health skills to his experience at Gillings and the grit to persevere to Morehead-Cain’s Summer Enrichment Program. Internships at Warm Heart Worldwide, Inc., in Phrao, Thailand, and with Morehead-Cain graduate fellow Keith Hoots ’75, director of the National Institutes of Health’s Division of Blood Diseases and Resources, also prepared Samuel for living in Southeast Asia and for precisely the kind of work he does today, he said.

“I came to Vientiane with very resilient critical-thinking skills related to public health data and epidemiology that allowed me to dive into this work right away,” Samuel said.

Rather than engendering fear, he said the pandemic should galvanize scholars interested in working in the field to get involved.

“It’s an important time to look at the world’s response so that the next time something like this happens, we are better prepared and can handle it,” he said.

Standing on the shoulders of giants

Samuel said that seeing headlines about UNC researchers tackling the COVID-19 pandemic has strengthened his appreciation for the University and Morehead-Cain’s robust alumni network.

“When I witness what UNC Gillings School of Global Public Health researchers are doing for vaccine development and research, I feel so proud to be a part of this great institution,” said the alum, who also worked with Anna Ilyasova ’21. Anna is a biology major who was interning at PSI before she returned to the United States in March due to the COVID-19 outbreak.

Gillings announced last month that its researchers are testing a broad-spectrum antiviral drug called remdesivir that might serve as a defense for preventing coronavirus infections.

“We should recognize how fortunate we are, even as scholars from the day we walk through the Foundation’s doors, to stand on the shoulders of giants who have accomplished so much,” he said.

Population Services International was founded by Phil Harvey and Timothy Black, two UNC alumni from the class of 1970. They graduated from the UNC School of Public Health with a Master of Public Health in family planning administration and in population dynamics, respectively. The organization focuses on issues related to malaria, child survival, HIV, and reproductive health through developing products and providing clinical services and behavior-change communication.

“It’s an important time to look at the world’s response so that the next time something like this happens, we are better prepared and can handle it” 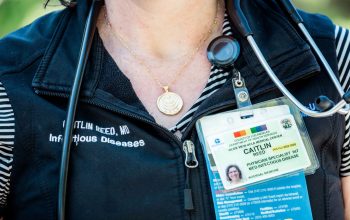