Today’s episode is a recording of a SEVEN Talk from the 2022 Alumni Forum. This talk, given by Harvey Kennedy ’74, is entitled, “Carolina Memories and Inspiration.” Harvey is a partner at Kennedy Kennedy Kennedy & Kennedy LLP. The alumnus was the second Black Morehead-Cain Scholar.

You can watch all of the SEVEN Talks on our YouTube channel.

Harvey Kennedy ’74 has spent the last 45 years practicing law in Winston-Salem, North Carolina, in the law firm of Kennedy, Kennedy, Kennedy & Kennedy, LLP. He represents individuals against major corporations and the government in employment, medical malpractice, and wrongful death cases. Harvey is listed in Best Lawyers in America, and was selected as one of the top twenty employment lawyers in North Carolina by North Carolina Lawyers Weekly in 2021.

Harvey has served on the board of directors of the National Urban League, the Winston-Salem Symphony, the Children’s Center of Winston-Salem, and the National Black Theatre Festival. He received his JD from Harvard Law School in 1977 and graduated from the University of North Carolina at Chapel Hill with highest honors in history in 1974.

While at Carolina, Harvey was a member of the UNC Varsity Debate Team, served in the student legislature, and was inducted into Phi Beta Kappa. Harvey is married to Pat Kennedy.

Good morning. Good morning, Morehead-Cain Alumni, staff, and current scholars. About four months ago, Megan Mazzocchi asked me to speak at this alumni forum. I told her that it would be a privilege. What I did not know at that time was that a month later, I would be involved in a serious accident which would fracture my left arm, shoulder, and hip. Two months ago, I could not even raise my left hand or arm, nor could I walk. I asked my medical team of physicians and physical and occupational therapists at Wake Forest University, Baptist Health, and Salem Town if I would be able to speak in Chapel Hill today. They all told me yes, that they would do their best to get me ready for this speech today. I have so much gratitude to my medical team, which has gotten me to this point. The title of my talk is Carolina Memories and Inspiration.

I was a senior at R.J. Reynolds High School in Winston-Salem in 1969, 1970. I remember coming to Chapel Hill for the final interviews for the Morehead Scholarship. At that time, the scholarship was limited to young men.

I recall that my interviews went very well with the Central Committee. Archie K. Davis, who was chairman of the board of directors of Wachovia Bank and Trust Company, was chairman of the interview committee. As I left the interview, I was accompanied by Roy Armstrong, who at that time was the executive director of the Morehead Foundation. He said that he wanted to talk with me briefly. He took me down this long corridor, and when we got to the end of the corridor, he said to me, “Mr. Kennedy, I just want to ask you one question. If we offer you the Morehead scholarship, will you come to Carolina?” I said to him, “Absolutely, I will come.”

I remember my first day as a student at Carolina. It was a sunny day with a Carolina blue sky. I was excited about my first day on campus. I did not know what to expect. My first class was a freshman honors English class. As I entered the classroom, I observed the professor sitting at the end of a round table. The class was made up primarily of fellow Morehead scholars. The professor was wearing a sport coat with holes at his elbows and a pair of shorts. His hair was uncombed. My first thought was, “What have I gotten myself into?” The professor’s name was Dr. Forrest Reed, and he was one of the best professors that I ever had at Carolina. The adage that you can’t judge a book by its cover proved to be true.

I was on the varsity debate team at Carolina. I was contacted by the UNC debate coach, Cully Clark, in the summer of 1970. He asked me and my twin brother, Harold, if we would join the UNC debate team. In high school, Harold and I were on the national high school debate circuit. The National High School Debate Institute at Northwestern University prides itself on accepting the top 100 high school debaters in the United States for an intensive summer program. My brother and I spent a good part of our summer at Northwestern prior to our senior year in high school. At the end of our senior year, we were considered one of the best high school debate teams in the country. In the summer of 1970, we went to a debate boot camp in the mountains of western North Carolina to prepare for our college debate season.

The Carolina debate program was made up of about eleven young men and one young woman. We were a close knit family. Many of the members of our debate team had been part of the National High School Debate Institute at Northwestern University. The Carolina debate program became one of the best in the nation. It was headed by our top team, Joe Loveland and Joe Maguire, both Morehead scholars. That team is considered to be one of the greatest, if not the greatest, debate team in the history of college debate.

I spent my senior year at Carolina working primarily on my honors thesis. I was privileged to have so many great history professors. My mentor was Dr. Frank Klingberg, who was an outstanding history professor. At the end of my senior year, I recall my brother going for his interview to defend his honest thesis. When he returned to the dorm, he informed me that he would be graduating from Carolina with highest honors in history. It was then time for me to go for my interview. When I returned to Granville Towers, I told my brother that I would also be graduating from Carolina with highest honors in history.

For me, the years I spent in Carolina were four of the happiest years of my life. I made a lot of friends at Carolina. Most of the students I encountered were friendly and kind. Carolina gave me a great sense of confidence. After I graduated from Harvard Law School in 1977, I returned to North Carolina to practice law. I’ve been involved in the Morehead-Cain Foundation in many ways. I served for many years on the Morehead-Cain District Selection Committee, and in recent years I’ve served on the board of directors of the Morehead-Cain Alumni Fund.

I would like to close with a story. As a young lawyer in my late twenties and thirties, I fondly recall times when a stately woman would come to our law firm in Winston-Salem. She would meet for four or five hours each time with my mother and father, who were her lawyers. But they were much more than her lawyers. They were her advisors and counselors. Her name was Dr. Maya Angelou. Every day that she visited our law firm was a very special day. I want to leave you with these words from Maya Angelou. “The thing to do, it seems to me, is to prepare yourself, so you can be a rainbow in somebody else’s cloud. Somebody who may not look like you, may not call God the same name that you call God, if they call God at all. I may not dance your dances or speak your language, but be a blessing to somebody. That’s what I think.” 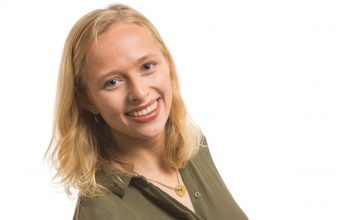