Sitting Down with Zeynep Tufekci

Dr. Zeynep Tufekci, guest lecturer at the 2018 Morehead-Cain Alumni Forum, is an associate professor at the UNC School of Information and Library Science (SILS) and a regular contributor to the New York Times op-ed section. She has an affiliate appointment with the UNC Department of Sociology and is a faculty associate at the Harvard Berkman Klein Center for Internet and Society.

Dr. Tufekci’s research interests revolve around the intersection of technology and society. Her academic work focuses on social movements and civics, privacy and surveillance, and social interaction. She is also increasingly known for her work on “big data” and algorithmic decision making. Originally from Turkey, and formerly a computer programmer, Dr. Tufekci became interested in the social impacts of technology and began to focus on how digital and computational technology interact with social, political, and cultural dynamics. 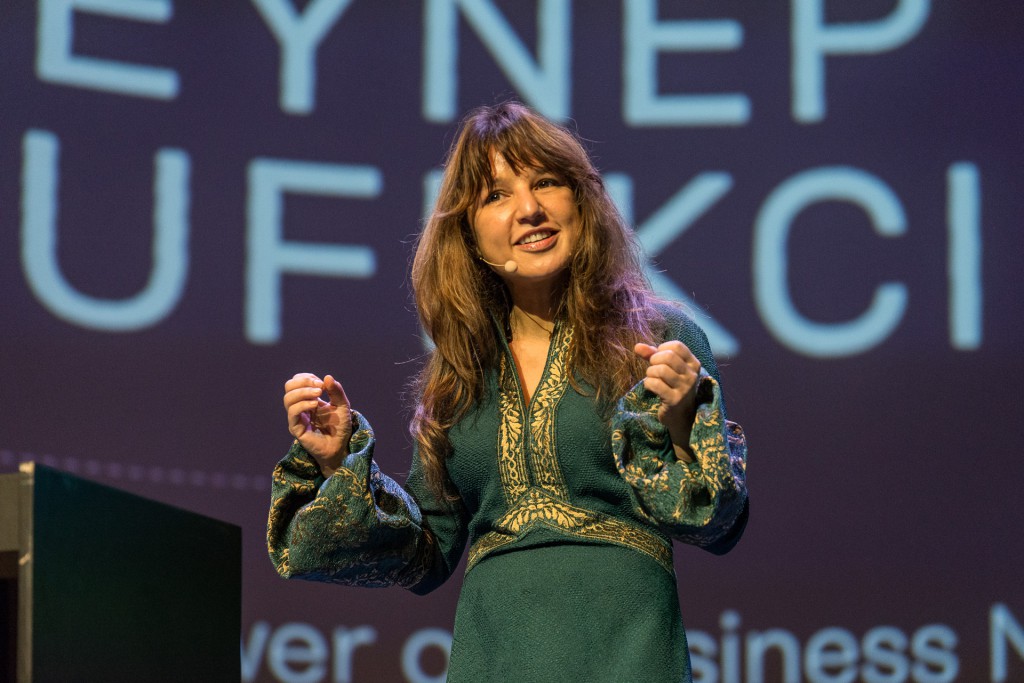 Morehead-Cain Foundation: What led to your shift from software engineering to sociology? Was there a key turning point?

Zeynep Tufekci: I first started working as a computer programmer professionally. What got me really interested in the sociology part was seeing how things were changing as I was working in the field. In my second job, I was working for IBM in Turkey. At the time, Turkey didn’t have internet, and it had a fairly censored and closed public sphere. Meanwhile, IBM had an internal intranet where employees all around the world could discuss stuff. I remember going there and having some questions about a project I was working on because it involved writing and compiling stuff on a mainframe that was built, I believe, before I was born. I would go on the forums and say, ‘How does this work?’ and someone would pipe up from some other corner of the planet and say, ‘Oh, I wrote that, and this is how it works.’ It was a really fascinating experience for me as a young person, especially in a country without a healthy, open, rich public sphere. I thought, ‘This is going to change everything.’ It hadn’t spread to the population yet, but you could see that it would change everything, when we had these technologies everywhere.

Also, I’ve always been interested in literature, in science fiction. There are a couple of kinds of science fiction. In one, you create something that’s technologically or scientifically wow. And you play with that. With the other kind, you think about, ‘If we change x, how is this going to change social relations?’

With the Jetsons, they have this world in which you have flying cars, and all sorts of tech. But on the other hand, the family is an idealized 1950s suburban family. The husband works, the daughter is on the phone, the wife is shopping. If you’re in the Stone Age with the Flintstones, it’s the same family. The show’s writers had the playful technical imagination, but they couldn’t really imagine a different kind of family. They put the social relations as static. And that’s not realistic.

MCF: What research are you currently working on that you’re excited about?

ZT: Right now I am working on something that’s quite exciting but also challenging: the spread of hate speech, conflict, and polarizing content online. There’s a way in which the workings of digital platforms and human vulnerabilities interact and make it easy for speech that creates this polarization effect. It’s a thorny topic.

MCF: In what ways do you use social media? I know you’re active on Twitter. Do you moderate or otherwise manage your own social media usage in any particular way?

ZT: If I’m on Twitter, I’m usually also doing research. It’s not the same for me as it is for many people. I’m observing what’s going on. If I’m working, I want to be mindful of my time and attention. But I don’t have a reason to avoid it in order to get work done, because it is part of my work.

The business model of online platforms is to take our attention, basically, and package it and sell it. I’m super cognizant of that. If this wasn’t my work, I’d turn a lot of it off and have a much more controlled relationship, because I can see what they’re doing. Sometimes I feel like a medical doctor observing an infection.

MCF: If you could make Congress pass one law right now, a law that would protect Americans from the dangerous effects of current technologies, what would it be?

ZT: One thing I think would really be a game-changer: if we made it illegal for data to be stored, collected, and traded the way it is. Right now for most data they can just be collected and stored, and freely sold and used. There needs to be more control of this.

It’s plausible that Silicon Valley would then have to develop new technologies that provided some of the similar functions, but better.

MCF: What do you think is the biggest misunderstanding in America about digital media?

ZT: I don’t think people really understand how much the business models—how these companies make money—have shaped what’s going on online. You just see a bunch of your friends post, perhaps, but there’s a lot going on. There are layers and layers of decision-making. What you’re seeing is just the surface of a very complicated process of how these companies are making money. This particular design is not inevitable; it’s one particular outcome in the design space. It’s due to a confluence of money, politics, legislation, and lack thereof.

MCF: For a student interested in the threats of digital media on democracy, what would be the best career path to choose to tackle these issues?

ZT: Definitely a combination of social science and some technical knowledge. If you don’t understand the technical side, sometimes it doesn’t make sense what you think about how it should work. If you don’t understand the social science side, then you’re really hampered. You’re just creating technical things that make sense on paper but operate very differently because they’re interacting with social things.

I teach at an information school, which is kind of at that intersection. I would encourage people to try to be at those intersections.

MCF: Are there any up and coming technologies you’re excited about? What do you see on the horizon that gives you hope?

MCF: Where’s the best Turkish food in the Triangle?

ZT: Talulla’s on Franklin, Istanbul in Cary, and Bosphorus in Cary.