Angela Liu ’04: An advocate for others

The week Angela Liu ’04 moved to Chicago to begin her career in law, Illinois’s most booming city experienced what many southerners never do—“thunder snow.”

A phenomenon in which snow and thunderstorms are joined together, it seemed as if this was just a simple fact of her life now. Thunder snow is not uncommon in that part of the country.

Little did she know that this storm was indicative of her future in the legal profession.

Angela takes in the same view every time she comes back “home” to Chapel Hill: evergreen grass, no matter the season, intertwined with brick pathways extending as far as the eye can see. And depending on the time of day, those pathways are quiet or chaotic as students, professors, and employees cross Polk Place. Angela was a player in this scene not so long ago. Now, she’s a visitor.

Warm and effervescent by nature, Angela fondly thinks back to her time at Carolina and the small moments in her life that turned out to be not so small.

Angela’s outgoing and authentic demeanor pairs nicely with her grit. She is Partner and Securities Litigation Attorney at Dechert LLP in Chicago and a “double Tar Heel,” obtaining her bachelor’s and law degrees from Carolina. Her career has focused on “witnessing the majesty of the law”—that’s how she refers to watching the judicial process unfold.

As a minority female working at a large firm, she feels as if she bears a responsibility to not only help others through the justice system, but to lead by example and break glass ceilings for other generations of women and Asian Americans.

And lead the way she has. Much like that Midwestern snow storm, Angela has been a force in her field, paving the way for future generations to create their own “authentic path.”

So what was it that made Carolina home? It was watching basketball player Tyler Hansbrough go head to head—or nose to nose some might say—against Duke in 2007. It was hurricane parties with friends stuck indoors. It was waiting in the long, winding line at Sunrise Biscuit Kitchen before class. It was warm chocolate chip cookies at the Carolina Inn during her Morehead-Cain Final Selection Weekend. It was sitting in the lush green grass, under the Carolina sunshine, in between classes. It was, unknowingly at the time, finding herself.

“Carolina made me a well-rounded person. Both UNC and the Foundation instilled in me an awareness of public service early on in my college career, what it was and what it means to serve.”

In her first job after college working as a political fundraiser in Washington, D.C., Angela quickly realized the fluidity that a law degree provided. The lawyers she interacted with on a daily basis were not the typical television show attorneys. “Lawyer” was not a one-size-fits-all career—and Angela is most definitely not a one-size-fits-all kind of human being.

“Carolina made me a well-rounded person. Both UNC and the Foundation instilled in me an awareness of public service early on in my college career, what it was and what it means to serve.”

Angela’s fascination with the judicial system complements her competitive nature. When asked why she loves her job so much, she explained, “I love getting a problem that just seems impossible and figuring out how to get to the solution. Through research, writing, storytelling, and then convincing the court why it should go that specific way.”

She describes her profession as an opportunity to take a really complex issue and make it easy to understand. “That ability is super motivating to me. I love a challenge. I am just not someone who would ever take an easier path.”

Easier paths don’t seem to be in her atlas. Before the age of 40, Angela has performed countless pro bono cases, fought for the rights of marginalized communities against prominent politicians and interest groups, and made partner at her firm.

Passionate about citizens’ ability to participate in elections and, in turn, impact the workings of our democracy, Angela has worked with the ACLU Voting Rights Project in states such as Wisconsin, Kansas, and Georgia to address voter registration issues and voter ID laws.

Although her impressive resume reads of complicated legal jargon, Angela doesn’t forget to remind others just how “fun” it is to be a lawyer.

“Carolina instills thinking of yourself as a whole person. Being yourself in this world will ultimately be your greatest asset, and people will recognize when you’re acting with integrity.”

Whether it’s utilizing the law as a check on politicians, attending a Chicago Cubs game, or sweating over a Saturday morning SoulCycle class, Angela displays an overflowing sense of gratitude—to be a Tar Heel, to be a lawyer, and to be an American.

“My parents came here with $400 and two suitcases, and they have given me nothing but love and so many different opportunities.”

Angela Liu will be a SEVEN Speaker at the 2020 Morehead-Cain Alumni Symposium, which will take place in San Francisco, California, from March 13 through 15. 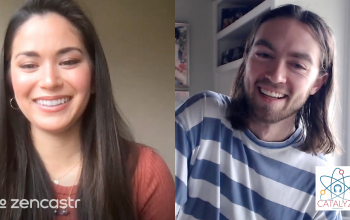 Ads, algorithms, and reversing capitalism in art, with producer and musician Nicholas Byrne ’19 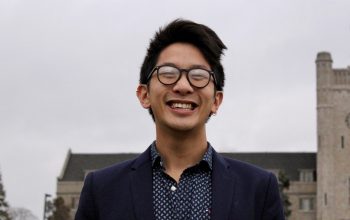